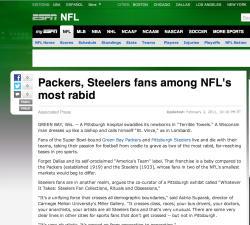 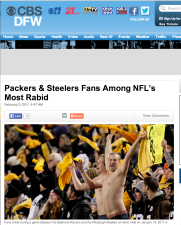 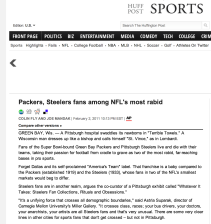 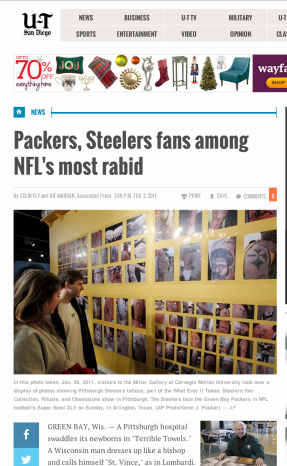 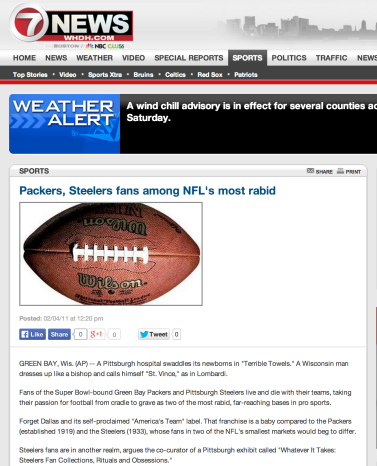 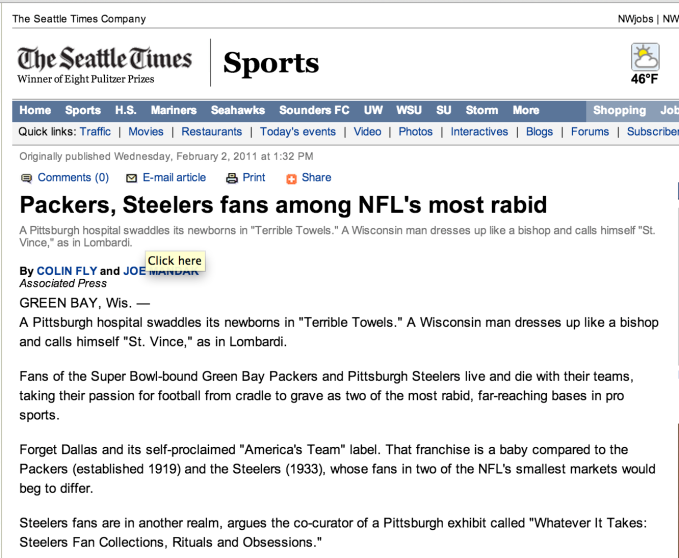 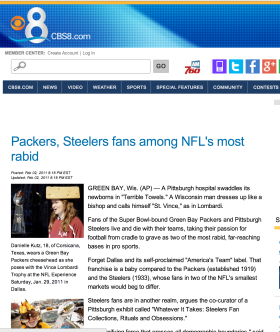 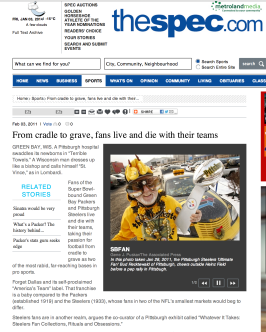 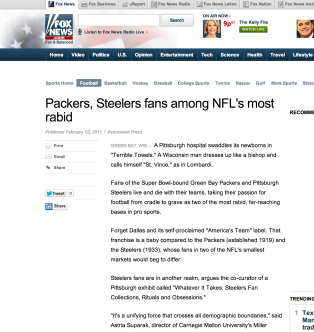 A Pittsburgh hospital swaddles its newborns in “Terrible Towels.” A Wisconsin man dresses up like a bishop and calls himself “St. Vince,” as in Lombardi.

Fans of the Super Bowl-bound Green Bay Packers and Pittsburgh Steelers live and die with their teams, taking their passion for football from cradle to grave as two of the most rabid, far-reaching bases in pro sports.

Forget Dallas and its self-proclaimed “America’s Team” label. That franchise is a baby compared to the Packers (established 1919) and the Steelers (1933), whose fans in two of the NFL’s smallest markets would beg to differ.

Steelers fans are in another realm, argues the co-curator of a Pittsburgh exhibit called “Whatever It Takes: Steelers Fan Collections, Rituals and Obsessions.”

“It’s a unifying force that crosses all demographic boundaries,” said Astria Suparak, director of Carnegie Mellon University’s Miller Gallery. “It crosses class, races; your bus drivers, your doctors, your anarchists, your artists are all Steelers fans and that’s very unusual. There are some very clear lines in other cities for sports fans that don’t get crossed – but not in Pittsburgh.

“It’s very ritualistic. It’s passed on from generation to generation.”

Just like Tyler Daniel Indof, who was wrapped, as are other newborns at UPMC Magee-Women’s Hospital in Pittsburgh, in a “Terrible Towel.” The gold-and-black dish rags that Steelers fans twirl like maniacs at games are, coincidentally, made in Wisconsin by a company headquartered just 135 miles from Lambeau Field…

While there is no sure-fire census of Pittsburgh fans, Suparak and co-curator Jon Rubin catalogued nearly 2,000 fan clubs or Steelers bars in all 50 states, every Canadian province, and in 27 countries.

They include Blozik’s Blitzburgh Cave, a bar in Bosnia, and La Botticella, another bar, in Rome, which is linked to the CMU exhibit by Skype so gallery patrons can interact with its customers over a live feed.