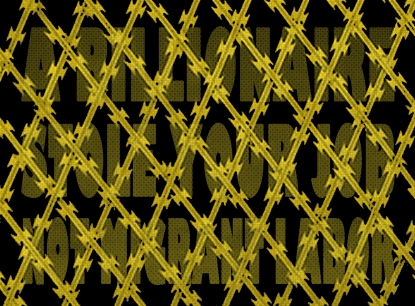 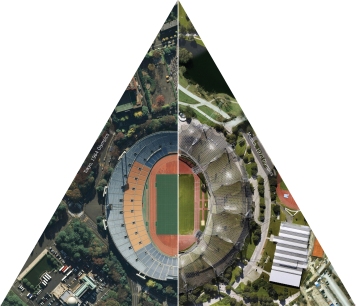 Setting a new precedent for city-wide collaboration among major art institutions, the 2011 Pittsburgh Biennial is co-organized by Carnegie Museum of Art, Miller Gallery at Carnegie Mellon University, The Andy Warhol Museum, and Biennial founders Pittsburgh Filmmakers and Pittsburgh Center for the Arts. Each of the five partner institutions will present a distinct exhibition of work by artists connected to the Pittsburgh region, reflecting each organization’s curatorial focus.

The Miller Gallery at CMU’s presentation, organized by gallery director Astria Suparak, features artists who work collaboratively, harmonizing individual perspectives, ideas, and talents. Embodying self-sufficiency within a cooperative spirit, the collectives and collaborators encourage us to reassess our assumptions and values, reveal the global in the local and the personal in the political, and imagine alternate realities and possible futures. The exhibition unveils four new installations and two recent projects, and includes sculpture, printmaking, painting, video, publications and workshops.

Sarah Ross and Ryan Griffis of Chicago and Carnegie Mellon alumna Lize Mogel of New York debut Global Cities, Model Worlds, an installation that explores the spatial and social impacts of “mega events,” such as the Olympics and World’s Fairs. The host cities of these international spectacles seek to transform themselves into “global cities” through planning, architecture, and ideology. Locally, these events pave the way for redevelopment projects that can create new public resources such as parks, stadiums, or transportation infrastructure, but often result in significant displacement of residents or industry, reinforcing existing inequalities. This installation asks us to consider what would happen if a mega event came to Pittsburgh. Using evidence from dozens of site visits and more than a decade of research, Global Cities contrasts the promise of transformation with the on-the-ground realities of urban development.

Transformazium, comprised of Ruthie Stringer, Dana Bishop-Root, Leslie Stem, and Caledonia Curry, create an evolving installation with bricks from a condemned building they deconstructed near their home in North Braddock, an outer borough of Pittsburgh. During the course of the exhibition, collective members and gallery visitors will clean the bricks, visibly transforming waste to useable resources and underlining the economic viability and environmental sustainability of deconstruction, or “green demolition.” In neighborhoods that face high levels of property abandonment as well as persistent under-employment, deconstruction “makes room for the possibility to discover wealth in places of blight and energy in places of stagnation.” Transformazium’s relationship-based practice examines systems of values, with a mission to use the creative process to transform ideas into tangible social and economic benefits.

Justseeds is a worker-owned cooperative of 26 printmakers in the U.S., Canada, and Mexico, with members and a distribution center in Pittsburgh. For the Biennial they built a landscape overpopulated by billboards. The artists simultaneously subvert the hard-to-ignore, omnipresent advertising medium and playfully concede their didactic tendencies; instead of peddling products, the handmade billboards advocate for borderless nations, indigenous sovereignty, and immigrant rights. Justseeds believes in “the transformative power of personal expression in concert with collective action.”

subRosa, a collective whose core members are Hyla Willis of Pittsburgh and Faith Wilding of Providence, speculate on how feminism could affect the scientific world, as it has with art and other areas of culture. In their new installation Feminist Matter(s): Propositions and Undoings, they invoke cultural producers, experimenters, and processes that could be antecedents of this new way of thinking and working, including 4th century scientist and inventor Hypatia; Romantic poet William Blake; modernist writer Virginia Woolf; interior designers the Omega Workshop; para-surrealist painter and anarchist Remedios Varo; and groundbreaking geneticist Barbara McClintock. Inspired by Woolf’s antidote to the war-mentality brewed in boardrooms and command centers, subRosa re-envisions lab workbenches as a series of small tables for more intimate and conversational “tea-table thinking.”

Temporary Services, composed of Carnegie Mellon alumnus Marc Fischer in Chicago, Salem Collo-Julin in Philadelphia, and Brett Bloom in Copenhagen, present two projects. Self-Reliance Library is a collection of recently published and out-of-print books and reference materials that the artists have found inspiring and hope will “provoke the reader, solve creative problems, or suggest imaginative directions for a range of creative practices.” Topics represented in the library include visionary architecture, nomadic living, self-publishing, everyday repair solutions, designs for alternate realities, survivalism, and skill-sharing. Personal Plastic is an ongoing project that explores the problem of plastic bags in our waste stream. Made from recycled bags, the banners feature quotes drawn from books in the accompanying library.

The artists in the Pittsburgh Biennial at the Miller Gallery at CMU choose to work with others, negotiating their individuality for the sake of the group or project. This collaborative approach echoes the long labor and union histories of the area, as well as the Biennial’s new partnership among local art organizations. This multigenerational selection of artists, who currently live in Pittsburgh or spent significant time here, also exhibit internationally, reflecting the connection Pittsburgh has to the global art world and broader discourses. The projects included here demonstrate the strength of collective voices in deciding the future of neighborhoods, cities, nations, and societies, and the importance of intimate conversations and compassionate listening.

4:30pm: Global Cities, Model Worlds Talk by R. Griffis, S. Ross and L. Mogel
Events like the Olympic Games and World’s Fairs are undoubtedly spectacles on a massive scale. World’s Fairs construct cities within cities, giving visitors the opportunity to see the most up-to-date wonders of the world in one space. The Olympics broadcast the world’s most accomplished athletes into hundreds of millions of homes. Each event leaves footprints visible from satellites and makes its mark on national budgets. This lecture will tell the story of common patterns and characteristics these mega-event share, creating similar effects on the people and places that host them. What do cities like Seoul, Atlanta, New Orleans, Shanghai and London have in common? How does the promise of media spectacle reckon with development on the ground?

5:30pm: Screening of Meishi Street (Ou Ning & Cao Fei, 85 min.)
In order to widen traffic routes for the 2008 Olympic Games, the Beijing Municipal Government orders the demolition of entire neighborhoods. Several evictees of Meishi Street, located next to Tiananmen Square, fight through endless red tape and the indifference of fellow citizens for the right to keep their homes. Given video cameras by the filmmakers, they shoot exclusive footage of the eviction process, adding vivid intimacy to their story.

Oct. 2, Sun.
11am-1pm: Brunch Discussion with the Biennial Curators
@ Pittsburgh Center for the Arts
Learn first hand from the curators who set a new precedent of collaboration in Pittsburgh’s art community.

Oct. 16, Sun.
3pm: Deconstruction Site Tour + Workshop with Transformazium, North Braddock, PA
Tour the building Transformazium has deconstructed and see materials extracted. While cleaning bricks and de-nailing wood with the group, join a discussion about the possibilities for these materials and your relationship with the architecture of our neighborhoods.

Nov. 16, Wed.
5pm: From Waste to Reuse: Dialogue + Brick Cleaning Workshop with Transformazium
@ Miller Gallery, 2nd floor
Together with Transformazium, reassign value to used bricks by cleaning them and claiming them as resource. Questions considered will include: What resources do we place value on in our neighborhood, and how is this value created? What histories, what present realities and what future visions are told by the architecture in our neighborhood? 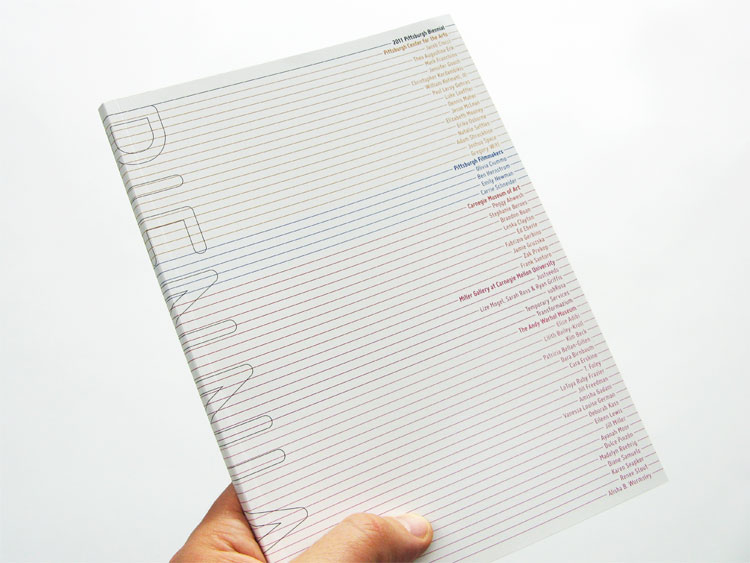 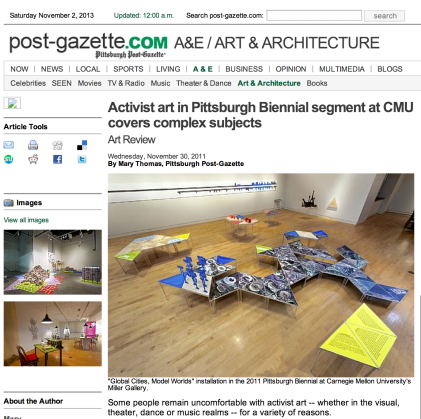 Post-Gazette’s review of the 2011 Pittsburgh Biennial at CMU

Excerpt:
The Pittsburgh Biennial at Miller Gallery is a visually and conceptually stunning exhibition that reinvigorates awareness of the problems that afflict the world today. Through its redefinitions of place and space and trespassing of disciplinary boundaries into economics and science, the biennial contributes to the larger conversation going on within the major currents of contemporary art as defined by [Terry] Smith: global connectivity, environmental issues and the effects of media. Part of the strength of this collection of works is its demonstration that art can not only visualize the problems we face on a global scale but can also inspire political participation and even further the critical dialogue about the role of art itself.  Perhaps the artists’ commitment to collaboration, to working with others and negotiating their personal visions, is what makes this group so attentive to the infinite forms of interdependency that defines twenty-first century life—from gender and public/private domains, ecological sustainability, urban planning, the cultural commons and the political imagination.
– Leila Nadir, “Globalization, the Environment and the Effects of Media,” Dec. 3, 2011

Excerpt:
Even to aficionados, activist art can be off-putting if it is overtly didactic, overwhelms with a massive volume of material, or has no visual appeal, by which I mean scruffy by neglect, not by intent.

The 2011 Pittsburgh Biennial segment housed at the Miller Gallery at Carnegie Mellon University rises above such concerns even though it is the most uniformly and pointedly activist of the five biennial venues. It does this through well thought-out installations that synthesize complex subjects…

The exhibition, which opened Sept. 16, has become even more timely seen within the context of the Occupy Wall Street movement and its advocacy for cultural examination and social change.
– Mary Thomas, “Review: Activist art in Pittsburgh Biennial segment at CMU covers complex subjects,”Nov. 30, 2011

Excerpt:
The 2011 Pittsburgh Biennial has stirred a lot of speculation and buzz since it announced last year that it would spread into five venues and combine the judgment and insight of four of the city’s most innovative young curators.
– Mary Thomas, “2011 Pittsburgh Biennial contains an unusual show of top local artists,” June 8, 2011

Excerpt:
But in this multi-lensed vision of Pittsburgh’s art scene [the 2011 Pittsburgh Biennial], perhaps no facet has been as ambitious as the Miller show, curated by gallery director Astria Suparak. Comprised of work by five teams of artists, the show focuses on groups approaching social issues, community life and transformation through art-initiated criticism
– Justin Hopper, “Transformations: The Miller Gallery lends the Pittsburgh Biennial a collaborative edge,” Pittsburgh City Paper, Nov. 2011

Excerpt:
If the Biennial achieves and sustains the momentum it needs, it will, biennially, be the envy of many cities in America…

Astria Suparak, curator and director of the Miller Gallery, has advanced in the Biennial’s web site a clear agenda… Notably, the university sponsorship of socially engaged art has had the effect of drawing new artists and collectives to the city and its satellites, some of which will be represented. This is a markedly different from the survey form of Biennial. Suparak’s selection may give us some evidence of the phenomenon of artist flight from metropolitan centers, as much for financial reasons as academic or social. Two collectives have moved here, one to Braddock, one to Lawrenceville.
– Graham Shearing, “A New Pittsburgh Biennial,” Fall 2011

Excerpt:
The remaining works on view are just as complex, combining the talents of several artists in unique and interesting ways that provoke the visitor into engaging with the work rather than simply explaining the subjects they have tackled. But this makes for a fun and multi-layered exhibit that visitors will definitely want to make time for.
– Kurt Shaw, “‘Biennial’ shifts to CMU with large-scale installations,” Sep. 22, 2011

Excerpt:
The show’s unprecedented collaborative approach–which brings together four of the city’s top arts institutions in Pittsburgh, is designed to showcase some of the most thought provoking and compelling work being created throughout the region today.

Excerpt:
The work of contemporary artist collectives and female pioneers is taking center stage as the second wave of the Pittsburgh Biennial opens at two significant cultural venues the city this weekend.
– “Pgh Biennial continues at Miller Gallery & The Warhol,” Sep. 2011