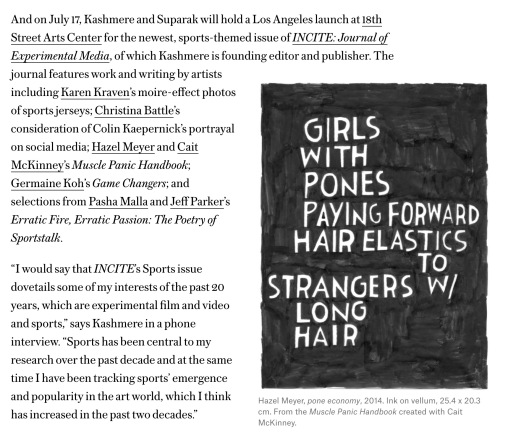 Excerpt:
Though the World Cup only lasts about a month, artist Brett Kashmere and curator Astria Suparak are conducting an extended project on sports and art—including soccer—from January to November of this year.

Their A Beautiful Game screening program, shown at VisArts in Maryland last week, has four films related to soccer: In Refait (2009) by Pied La Biche, the artists remake, frame for frame, a video of a World Cup match between France and Germany from 1982—but in everyday urban settings, like parking lots and highway overpasses. México vs Brasil (2004) by Miguel Calderón shows a patrons in a São Paulo bar watching a soccer game on TV—a game that, unbeknownst to them, is not real, but has been edited together from prior footage. The Zidane World Cup Headbutt Animation Festival (2006) by Anil Dash presents short, fan-produced takes on an iconic soccer moment. Football (2011) by Ana Hušman looks at the first matchup between England and Argentina post Falklands War at the FIFA World Cup in 1986. But in keeping with the wider scope of Kashmere and Suparak’s 11-month sports-art project, A Beautiful Game also includes Alethea Arnaquq-Baril’s 2010 film of Inuit high kick and Paper Rad’s 2004 video game mashup about Boston Celtics hall of famer Robert Parish.

And on July 17, Kashmere and Suparak will hold a Los Angeles launch at 18th Street Arts Center for the newest, sports-themed issue of INCITE: Journal of Experimental Media, of which Kashmere is founding editor and publisher. The journal features work and writing by artists including Karen Kraven’s moire-effect photos of sports jerseys; Christina Battle’s consideration of Colin Kaepernick’s portrayal on social media; Hazel Meyer and Cait McKinney’s Muscle Panic Handbook; Germaine Koh’s Game Changers; and selections from Pasha Malla and Jeff Parker’s Erratic Fire, Erratic Passion: The Poetry of Sportstalk.

“I would say that INCITE’s Sports issue dovetails some of my interests of the past 20 years, which are experimental film and video and sports,” says Kashmere in a phone interview. “Sports has been central to my research over the past decade and at the same time I have been tracking sports’ emergence and popularity in the art world, which I think has increased in the past two decades.”

Kashmere played hockey growing up in Saskatchewan, then played basketball and coached women’s basketball, which also informs his point of view. His films include pieces on hockey violence, and he is currently working on a UC Santa Cruz PhD thesis piece looking at American football and its representation in media. For her part, Suparak is interested in how “sports are now a key part of fashion and music and celebrity culture,” she says. Among her past projects are exhibitions on fan culture, as well as a more recent survey of sports-related art, Power Forward, in Maryland.

“For me, sports is like a gateway or a ruse to talk about other issues,” says Suparak, “There is that constant refrain of ‘Keep politics out of sports.’ But sports has always been political—political in who is allowed to play, who gets penalized for what, what are the team names and mascots, who gets to use eminent domain to build stadiums. Recent stories of cheerleader abuse, and abuse of youth athletes by coaches, also remind us that all levels of sport are very political.”

At the same time, the ability of sports to provide moments of ecstasy and unity hold that political aspect in tension. “There is a lot that is fucked up about sports but on the other hand, this past week, I was in the airport in Calgary waiting for a flight and everyone around me was completely riveted on the Argentina-Nigeria game at the World Cup,” Kashmere says. “It reminded me that these games are so much more than just games—it’s an amazing thing to be united in a feeling with a mass of people who are both strangers and friends. There is that magical social aspect of sports which can be transcendent at times, and that is part of what I find fascinating and compelling about sports as a subject.”