“Ursa Major Contemplating The Meaning of The Universe 10″ by Rudy Shepherd (2005, Lambda print, edition 1/5, 40×40”, courtesy of the artist and Mixed Greens Gallery) 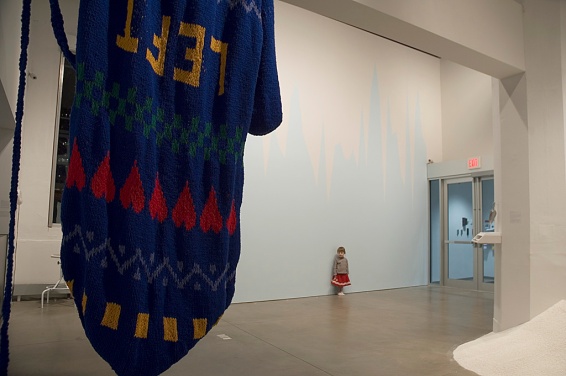 Staging the coldest season as a playground for imagination, The Warehouse Gallery presents Embracing Winter, a group exhibition featuring knitted sculpture, psychedelic video, interactive displays, sly photography, and crisp audio and book works by American, Canadian and Italian artists. The show is on view Feb. 13 through March 31 and accompanied by a Hot Cocoa Reception on Feb. 15, Lunchtime Talks by exhibition artists and an earth scientist on Feb. 16, and an Experimental Film Screening on March 8.

“As technology advances, our concept of physical comfort becomes increasingly narrow and artificially mediated,” remarks gallery director Astria Suparak. “We can program thermostats to the degree, swim in heated pools in the winter, and ice skate in tropical regions. We prefer to encounter the seasons as an aesthetic experience, when convenient, within the self-created myth of a weatherless society. Traces of snowfall are quickly removed from city streets while windows remain decorated with impossibly gigantic paper snowflakes.” As Mirko Zardini of the Canadian Centre for Architecture writes, “Forgetting the climate, ignoring it, or trying to eliminate it from urban reality and our imagination not only deprives us of the pleasure of different seasons, which foster agreeable as well as disagreeable situations and conditions, but inevitably leads to unexpected confrontations with the more dramatic consequences of weather.”

Syracuse is the perennial winner of the Golden Snowball Award, for the most snowfall in New York State. Embracing Winter celebrates this crystallized precipitation as the key to a delightful set of activities, and as an ephemeral filter to make ordinary surroundings new again.

• Janet Morton is knitting a model of her home in Guelph, Ontario, in time for the exhibition reception. Also in the show are Morton’s absurdly large, 15-foot-long handmade mitten and a tree branch sculpture frosted with lace. Her prolific body of work, including cozies for buildings and sweaters for sub-Saharan animals in Canadian zoos, spurs consideration of human excess, perceived needs, imposed aesthetics, and the value of time and repetitive labor. “The intent has been to playfully transform objects, critically examining impulses of anthropomorphization taken to extremes, misplaced sentimentality and control of nature,” Morton explains.

• Rudy Shepherd , wearing a brown bear costume sewn by his mother, tromps in a New England winter scene. The casual, immediate air of a snapshot in these large photographs belies heavier implications. Selected from a series titled Ursa Major Contemplating the Meaning of the Universe , Shepherd’s performative work questions the meaning of home, the idea of comfort, the structures of transcultural and collective identity, and assumptions based on facades.

• Italian Futurist Bruno Munari ‘s children’s book, Little White Riding Hood, shows there is substance in seemingly empty pages if one is inventive enough. The International Herald Tribune claims, “Munari is one of the most influential designers of the 20th century. Not because he has imposed a particular style or look, but because he has encouraged people to go beyond formal conventions and stereotypes by showing them how to widen their perceptual awareness.”

• Available in a listening station as well as on the gallery’s website, Collin Olan’s delicate audio piece encapsulates the melting process of contact microphones frozen inside a block of ice. A tiny picture of an awe-inspiring, voluptuously iced landscape from a family camping trip in the Midwest accompanies the recording.

• “In these familiar spaces, transformed in winter not only by a blanket of snow but also by a state of inactivity, we are offered glimpses of the sublime,” says Lisa M. Robinson about her photographic series Snowbound. The selected images pristinely capture a moment in time while pointing to the cycle of seasons.

• Amidst these artists’ works, The Warehouse Gallery has produced interactive and informative displays. Visitors can compare their heights against a full-scale graph charting the snowfall in Syracuse over the last half century. Free samples are provided of de-icing agents that are less damaging to the environment than the conventionally used salt. A presentation of locally purchased snow shovels was inspired by Marcel Duchamp’s 1915 readymade In Advance of the Broken Arm. As a munificent reversal of this historic Dadaist work, the gallery renders the display useful again, allowing guests to borrow the commercially made tools from an art gallery setting.

In a collaborative spirit, Winter Light is co-curated by filmmaker and writer Brett Kashmere and gallery director Astria Suparak, and co-presented by The Warehouse Gallery, neighboring arts center The Redhouse, and Thursday Screeners, a student group at Syracuse University. The Warehouse Gallery continues its expansion of art exhibition beyond the physical location of the gallery with roving artist talks, online broadcasts, and now, film screenings.

Similar to the Embracing Winter gallery show, Winter Light revels in the fleeting aesthetics of winter, presenting works that document ice melting, crystals forming, stars twinkling, birds migrating, surreal dreaming, the loss of consciousness and the warmth of a flame.

“Shovels on loan from the gallery and free piles of salt – what a sophisticated move, curatorially, that is. The artists you’re showing (especially people like Murata and Da Corte) are rising stars.”

“Bracingly witty and cunningly curated, the latest show at the Warehouse Gallery, Embracing Winter was the place to be on opening night. A crowd of with-it and fashionable twenty-something Upstaters (who says the interesting young people are fleeing ‘Cuse?) sipped hot chocolate and wandered through the collection of smart new works with a winter theme. All-too-familiar items like snow shovels and piles of de-icer (more environmentally friendly than salt) became Duchamp-inspired installations. Among the best of the art objects were a delightful house made of knitted wool and an astonishingly mis-sized pair of mittens, both by Canadian artist Janet Morton. Brrrrr! This is one of the cleverest shows I’ve seen in these parts.” – Johanna Keller, Director, Goldring Arts Journalism Program, Syracuse University, NY

“What came through for me in and after the exhibit was the way it broke up the ‘patterned thinking’, upended the stereotypes of winter ‘fun’ as well as winter doldrums, that dull my imagination.” – Bob

“Although we were defeated by the three foot bank of hard-packed snow left by the snowplow across our driveway minutes before the opening reception for Embracing Winter, we visited the Warehouse Gallery yesterday.

The show looks great, so minimally brrr. It is refreshing (and different for Syracuse) to see a group show treated as an installation. And how clever to paint snow heights on the walls so we can see what 190 inches of snow means, the heights against the dates triggering memories of winters past, “Ahh our first winter when we thought the worst was over and the Blizzard of ’93 dumped almost 4 feet of snow in a matter of hours.”

It was also clever that you could make these elements work together…especially challenging and interesting that you could place Janet Morton’s white knitted house and Rudy Shepherd in his black bear costume in the same show and along the same wall. I have to mull this over for a while.

As we listened to the audio piece we looked out the window to the creek below and saw four beautiful ducks, small ducks with large geometric headcrests, hooded mergansers maybe or buffleheads. So wonderful to watch them diving and swimming in the middle of a city in the middle of winter, unconcerned by the cold and snow, delighted with the open, flowing, cold green water. I have never seen these ducks before.

How on earth did you arrange this?” – Jan Pottie

“BRRRRIFIC! Great staging of the exhibit. The space is perfectly purposed.” – Alex Rogalski

“Similar to a breakthrough first album of a hot new band, it’s difficult to maintain that same energy in a follow-up sophomore release. But the Warehouse Gallery’s Embracing Winter exhibition proves to be the Pinkerton to their Blue Album.” – David Clayton

“This seems totally cutting-edge. Is this the new wave of galleries?”