The tropics exist as a dreamy respite from “real” life …for some people. But it’s not a holiday for the 3.2 billion people who live in the tropical zone. White-made media reinforces a racialized, exotic vacation trope, training their cameras on and constructing sets with gangly palm trees, pristine beaches, glistening oceans, and deferential Pacific Islander, Asian, Caribbean, and/or Indigenous peoples. This is the cherry-picked, colonialist view of tropical lands, which are presented as escapist fantasies and prizes for white Americans and Europeans.

People of color are the global majority and within a couple decades the tropics will be home to more than half of the world’s population. Yet white science fiction filmmakers and television creators insist on creating protagonists from a white minority who sojourn to a distant, tropical paradise centuries and millennia into the future.

When locals make an appearance in white visions of Pacific, Caribbean, and Southeast Asian islands, they are usually flower-adorned, nameless, and anonymous. People of Asia and Oceania are presented interchangeably, as if they belong to one homogenous culture. Although 68% of displaced people and 85% of the extreme poor live in tropical countries, you’ll only see, through the white imaginary, tropical people happy to serve white visitors with a smile. The actual lives of brown people don’t matter; instead, they are portrayed as absurdly stuck in a supposedly “undeveloped” past in sci-fi futures. They can never be worthy of main character status — even if they are part of the majority population — in both the present and the future.

Vivid sunsets and prehistoric plants appear as holographic wallpaper in cyberpunk cinema. Non-white inhabitants with undulating hips beckon to white characters in advertisements for implanted memories. A relaxing tropical getaway or retirement — or the simulation of such — is a reward earned by hard-working white people: A dream in which they can live carefree, with a gentle and subservient class of brown locals to pick up after them, grateful for their benevolent spending of overvalued dollars and Euros. This old, racist topos derives from U.S. and European imperialism and placement of military bases in strategic island territories, insidiously erasing Pasifika, Asian, Caribbean, and Indigenous intellect, cultures, histories, and autonomy. Lazily replicating these stale stereotypes, white sci-fi filmmakers are praised as visionary geniuses.

Tropicollage is a short, looping video that collages footage from thirty years of futuristic sci-fi movies and television shows that employ a fetishized tropics trope. Commissioned by Other Futures, it is one part of Astria Suparak’s ongoing research project, Asian futures, without Asians.

Aloha, Boys is an accompanying wallpaper piece designed to frame Tropicollage, made on the occasion of the exhibition The Hearing Trumpet at Galerie Marguo, Paris, 2022.

For a detailed history of U.S. imperialistic intervention on the island of Kauaʻi, see Anthony Banua-Simon’s documentary essay, Cane Fire (2020). 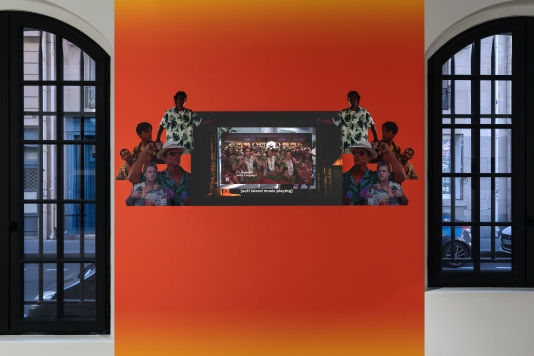 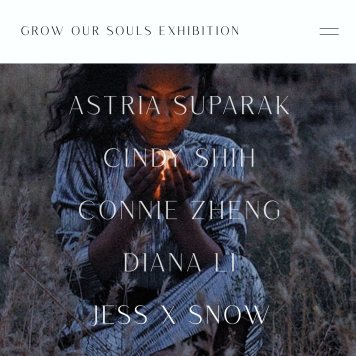 Website for “Grow Our Souls” at SOMArts, San Francisco, 2022 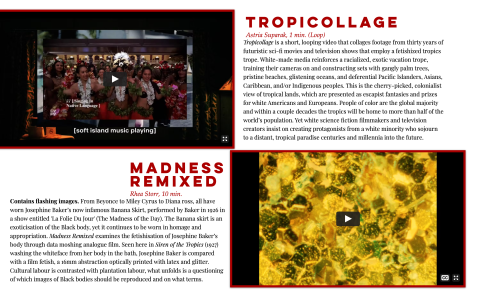 Inspired by Grace Lee Boggs,  Grow Our Souls showcases artists who are reimagining labor in an era of climate change and late-stage capitalism.

The exhibition, titled after Leonora Carrington’s fantastical 1974 novel, features artists whose eloquent articulations result from their critical quest into the past and imaginative investment in the present.

Suparak’s installation of Tropicollage at Galerie Marguo is framed by a new wallpaper piece created for the occasion, Aloha, Boys.

MONDAY, Vol. 6 extends the themes and inquiries of the 2021 exhibition Lux Aeterna, considering how technological, economic, and cultural forces shape the ways we produce, share, and experience media — and how that media in turn influences our values and aesthetics. The issue includes a full color, 10-page spread visual essay version of Suparak’s Tropicollage.

‘The Hearing Trumpet,’ a recent group show of theirs inspired by the hopeful and radical world-building in the artist and writer Leonora Carrington’s 1974 surrealist novel of the same name, brought together work by Asian artists living in cities across the Americas and Europe. Ms. Guo describes it as a statement show. […] ‘I think it had a really good impact.’ So much that a second installment of ‘The Hearing Trumpet,’ with work by the video artist Astria Suparak, the ceramicist Heidi Lau and others, opened Saturday.

Ms. Guo also attributes the success of the show to a larger shift — away from stuffiness and localism”