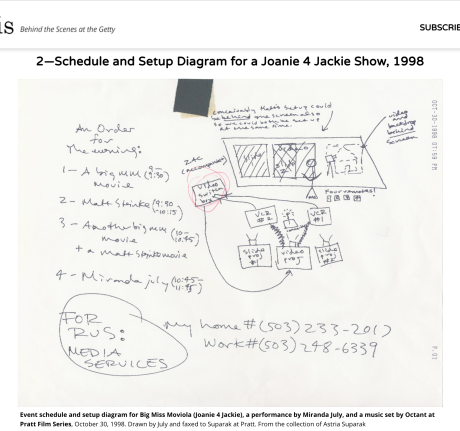 Screengrab from “Behind the Scenes and On the Stage with Joanie 4 Jackie,” Astria Suparak, THE GETTY: The Iris, Feb. 2, 2017. Image 2. 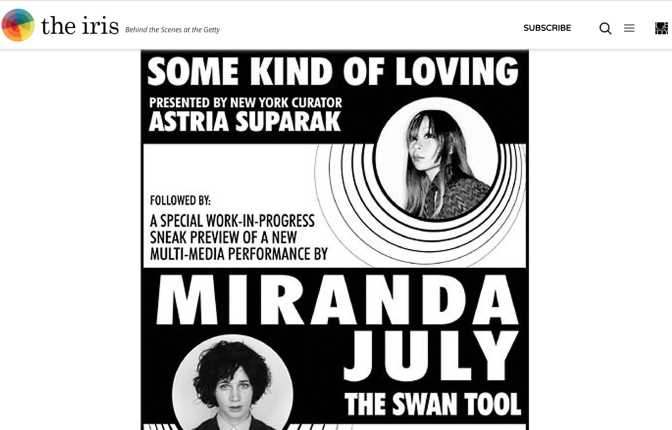 Screengrab from “Behind the Scenes and On the Stage with Joanie 4 Jackie,” Astria Suparak, THE GETTY: The Iris, Feb. 2, 2017.

“Behind the Scenes and On the Stage
with Joanie 4 Jackie“

Joanie 4 Jackie was an underground film network formed by artist Miranda July in 1995. For more than a decade this project fomented a generation of female-identified filmmakers—inspiring girls to make movies for the first time, circulating work by seasoned artists to places their distributors and gallerists couldn’t reach, documenting films that hadn’t yet been made, and connecting people across the country through booklets of letters that arrived with each videotape. By the time the project had run its course the work of over 200 filmmakers was distributed through 22 compilation tapes, and Joanie 4 Jackie exhibited from Vancouver to Monterrey to Ljubljana in spaces from punk clubs to the Museum of Modern Art.

It’s taken a village, and we are thrilled that this labor of love is now being preserved by the Getty Research Institute, accessible to all, and contextualized amongst other important artist and video archives. This project comes out of feminist resistance and grassroots networking—tactics that continue to be valuable and urgent now.

Throughout the last twenty years, my relationship to Joanie 4 Jackie has evolved from spectator to fan, consumer, event programmer, tour booker, distributor, historian, and curator. Below is a selection of artifacts spanning this time, now available along with the complete archive at joanie4jackie.com.