Corporate Takeover: The Yes Men take on companies using their own tools

Angry about the state of the world? You can send infinite e-mails to elected representatives, offending organizations and corporations. You can vote. You can picket and protest (but that will probably only get you coverage if you are, bless your heart, a teabagger). But even if you’re doing all these things, trying to make yourself heard can feel as frustrating as cleaning up the BP oil spill with a teaspoon. (More on that later.) So how else can you effect political change?

The “Yes Men” have the answer. Parody. With their deadpan spokesman delivery, pitch-perfect fake Web sites, press releases and PowerPoint presentations, Andy ­Bichlbaum and Mike Bonanno(whose real names, Jacque Servin and Igor Vamos, sound equally fake) have fooled the likes of the BBC, the World Trade Organization and Reuters. They have passed themselves off as representatives of HUD, Dow Chemical and Halliburton. Their first solo show, “Keep It Slick: Infiltrating Capitalism with The Yes Men,” is currently on view at DiverseWorks Art Space. The traveling exhibition was curated by Astria Suparak and organized by the Miller Gallery at Carnegie Mellon University and the Feldman Gallery at Pacific Northwest College of Art.

The Yes Men sprung to prominence with the now-legendary stunt that conned the BBC and (temporarily) embarrassed and (briefly) caused financial losses to Dow Chemical Corporation. In 2002, The Yes Men created the site www.dowethics.com, closely mimicking the design of the Dow Corporation’s own Web site but offering far more candid and truthful information about the company. In 2004, the BBC was looking for someone to interview about the 20th anniversary of the Union Carbide disaster in Bhopal, in which the release of toxic gases from the company’s plant killed thousands — more than 25,000 to date by some estimates — and injured hundreds of thousands. (Dow purchased Union Carbide in 2001. The site, which is still poisoning residents, has never been cleaned up and Dow has never accepted responsibility for it.) So the BBC came across The Yes Men’s “Dow Ethics” Web site and e-mailed, asking for a representative to speak on air. Jude Finisterra (an alias used by Andy Bichlbaum) obliged. Bichlbaum’s pseudonym combined Jude (Patron saint of lost causes) with the Latin for “end of the earth.”

Finisterra declared that after 20 years, Dow was taking responsibility for the Bhopal disaster and liquidating Union Carbide to pay for the cleanup of the site, as well as care and compensation for Bhopal residents. The BBC was thrilled by the scoop, flashing “BREAKING NEWS” across the bottom of the screen and running the segment twice before Dow contacted them and denied that they were compensating anybody. Their stock dropped for about three hours until the denial.Seeing further opportunity to call attention to Dow’s dickishness, The Yes Men issued a widely disseminated and quoted “Dow” press release with frank, detailed explanations of the greed and self-­interest underlying the company’s refusal to take responsibility for the disaster.

“Keep It Slick” is full of videos and artifacts from The Yes Men’s activities, including the BBC segment. Exhibitions presenting documentation of performances are always tough, but this one fares pretty well, bolstered by the fact that The Yes Men held an activism training session here in conjunction with the show. A video monitor with a BBC clip opens the exhibition. Underneath it is a desk with a collection of the badges and IDs the duo have faked or finagled to get entry into a host of events. The main gallery contains absurd “products” from past stunts, like the “Survivaball model x7” and the “manager leisure suit.” The Yes Men’s canny mimicry of business culture is on display in their mock boardroom with running PowerPoint presentations, bad paneling, motivational posters and bottles of Bhopal water.

The “Survivaball model x7” — The Yes Men know that model numbers make things so much more convincing — is described as  “a self-contained survival suit that allows the richest people in the world to make it through the worst climate catastrophe. It is a high-­concept, high-tech, fabulously expensive gated community for one.” Complete with detailed schematics, the giant, goofy, inflatable suit was presented at a Catastrophic Loss conference held at the Ritz-Carlton hotel in Amelia Island, Florida, where attendees inquired about its comfort and affordability with a straight face.

Now, I have to assume that not everyone who attended that Catastrophic Loss conference was evil, stupid or consumed with craven self-­interest. But The Yes Men have pulled stunts like this on numerous occasions and more often than not, no one raises any objections. Anyone who has worked for a large corporation is familiar with both unmitigated bullshit and patently moronic ideas being presented with a straight face. Sometimes the company is consciously lying, and sometimes some managerial idiot’s idea is implemented through a combination of unquestioning ­fealty, self-interest, fear and apathy. The corporate world has more than its share of Kool-Aid drinkers, and the go-along-to-get-along types who will patiently sit through something they should know is ridiculous. These attitudes can also lead people to do things that in the real world are considered immoral or unethical, but in the corporate bubble are just “good business.” The Yes Men are attempting to shock these people back into reality.

Other Yes Men projects, like the gold spandex suit with butt-cheek controls and a big inflatable dick-like extension containing a video monitor for observing sweatshop workers, are just too silly. I think The Yes Men are at their best when they present a company or a government as it should be, as in the Dow stunt, or as when they masqueraded as HUD officials vowing to rebuild and reopen public housing in New Orleans, complete with health clinics. They also masterfully faked a copy of The New York Times declaring the Iraq War had ended and Condoleezza Rice had apologized for the WMD scare. The subsequent denials were all the more damning.

Considering the current, brought-to-you-by-BP environmental catastrophe, we need The Yes Men and their like more than ever. Where is the contrite Lamar McKay, BP president and chairman, vowing to liquidate the company worldwide to make right the destruction it has caused in the Gulf, and God knows where else? In the meantime, when those tar balls start washing up on Galveston, I’m thinking about scraping up as much of that crap as I can and returning it to its rightful owner, BP, conveniently located at 501 Westlake Park Blvd., Houston, TX 77079-2604. (If you’re feeling chatty, BP’s number is 281-366-2000.)See http://challenge.theyesmen.org/how#start, The Yes Men’s helpful, ­activist how-to site.

Mike Bonanno and Andy Bichlbaum are the main men behind The Yes Men, a prank constituency that infiltrates corporate seminars and poses as company spokespersons in the hopes of exposing greed and hypocrisy. Last year the film The Yes Men Fix the World documented some of their most famous stunts, like Bichlbaum’s impersonation of a Dow Chemical spokesman taking full responsibility for the disaster in Bhopal, India; the U.S. Chamber of Commerce reversing its position on global warming policy; and a widely distributed, fake New York Times with the headline “Iraq War Ends.” This is the first-ever solo exhibition of The Yes Men’s exploits, and it includes mixed-media works, video and a fully outfitted “conference room” with PowerPoint presentations. Don’t miss the hilarious video of Bonanno and Bichlbaum crashing a Catastrophic Risk conference in Florida, posing as Halliburton employees there to introduce the Halliburton Survivaball, an absurd, body-encapsulating, inflated suit that promises to save lives in the case of a natural disaster. The confused faces of conference-goers, as well as the inevitable questions from attendees regarding Survivaball’s effectiveness during a terrorist attack, are priceless and unsettling. Several actual Survivaballs are on display, too. Hysterical stuff. 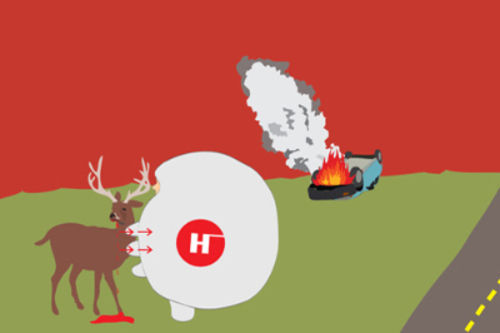 Bigwigs worldwide live in fear of The Yes Men and their hijinks-style activism. The protesters pose as seminar speakers and spokesmen to expose organizations – such as Halliburton and Dow – who they believe exploit capitalism. (As seen in their feature-length movie, The Yes Men.) “They urge us to consider the importance of ethics in our capitalist-driven society, and they work tirelessly to hold corporate and political ‘leaders’ accountable,” says Astria Suparak, curator of “Keep It Slick: Infiltrating Capitalism with The Yes Men,”via e-mail. Her museum exhibition (of sorts) uses original documents, nametags, costumes, PowerPoint presentations and more to explore the history of The Yes Men’s notorious takeovers of corporate boardrooms and expos. “We reveal [their] simple but effective methods, hopefully inspiring the audience to take up the battle, and to do something better,” says Suparak.