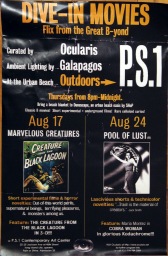 Stills from “Removed” by Naomi Uman; “Sincerely, Joe P. Bear” by Matt McCormick; “The Morphology of Desire” by Robert Arnold

Still from “Mother Nature” by Cathy Cook; Poster for “The Creature from the Black Lagoon” 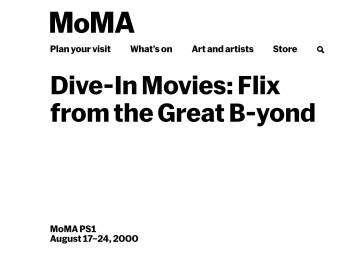 Dive-in Movies: Flix from the Great B-yond is a return of the Living Drive-in. Held outdoors on PS1’s urban beach, Dive-in Movies is a technicolored summer of star-gazing, subversive silver-screen myths, love notes from the underground, and 3-D creatures that can only come out at night. Dive-in Movies is curated by Ocularis, Astria Suparak, and Bradley Eros, with lighting design provided by Galapagos Art and Performance Space and music arranged by Lucien Sanaha. Dunescape by SHoP, winner of MoMA PS1’s Young Architects Program competition.

Each classic B-feature is preceded by a program of short films by experimental and underground directors: works that spin out from the B-side: vulgar and sublime reworkings of cultural detritus and cinema cliches. Sprinkled with rare celluloid novelties. Risque Scopitones, lurid trailers, digest features.

Dive in to MoMA PS1 for cinema, snow cones, a cool drink, and poolside surprises in a unique open-air environment. Dunescape, an urban beach by architecture group SHoP, is comprised of wading pools, misters, changing cabanas, and a boardwalk, inviting visitors to lounge, socialize, sunbathe, and cool off. This also houses the acclaimed DJ Warm-Up Series. Bring your beach blanket for reclined movie viewing!

Concurrent exhibitions and events at PS1:
Volume, Bed of Sound; Max Neuhaus: Drawings; Warm Up 2000; Min Tanaka; Around 1984: A Look at Art in the Eighties; Greater New York.

“My pool is sometimes troubled. One sees strange fantasies in the water.” – The Mummy
Out-of-this-world perils, horrifying pleasures, supernatural beings, bathing beauties, and monsters among us.

“Juvenile does not equal shameful and trash is the material of creators. It exists whether one approves or not. You may not approve of the Orient but it’s half the world and it’s where spaghetti came from. Trash is true of Maria Montez flix but so are jewels, Cobra jewels and so is wondrous refinement.” – Jack Smith, The Perfect Film Appositeness of Maria Montez

Horrors! Sand, sea, stars and cinema. Could it get any better? B-movie buffs can throw down their beach blankets and dig in their toes when “Dive-In Movies” recreates the legend of the drive-in movie at P.S.1… The two-night series offers short experimental films before venturing into alien territory with a 3-D version of “The Creature from the Black Lagoon” on Thursday…

Welcome to Williamsburg’s Ocularis, an independent cinema collective that combines the outdoor comfort of a drive-in with the visual and mental stimulation that independent cinema used to provide when it was still independent. Ocularis turns film into an experience again and replaces pre-fab storylines and special effects with the wonder we felt when watching movies for the first time.

Take a recent showing in the outdoor sculpture parking lot of MoMA’s PS1 contemporary art center, when the crowd plunked down on blankets or into folding chairs to sink their eyes into A Pool of Lust: a collection of shorts celebrating experimental film and erotica… That [the films] began at all, that the crowd waited for them to start, proves experimental and repertoire films can have an avid following here in New York. Under the stars, spectators sitting on sculptures, folding chairs and blankets saw 10 shorts in an outdoor space full to capacity.

In Sincerely, Joe P. Bear Matt McCormick used hand-painted film to create a seductive light entity and appropriated news clips to show how polar bears cope with unrequited love. While in Robert Arnold’s The Morphology of Desire morphine covers of Harlequin novels interspersed with lines from romance novels spun into a final collective kiss. In Naomi Uman’s Removed, Uman re-appropriated the female body and rescued female desire from clips of ’70s moving image pornography to the sound of loud moaning by evocatively covering them with the brushstrokes of nail polish remover. Afterwards was Cathy Cook’s brief, yet very moving, Ass Dance, followed by the overboard, animated spazzmentary, There’s a Pervert in our Pool, a Martha Colburn collaboration with Fred Colline’s poetry. Then there was Jay Capela’s found footage in the touching, Breathe, a comedy on the end of romance. Finally a commercial on what two women could do to each other with Johnson’s Baby Powder to relieve summer heat in M.M. Serra’s Just for You Girls.

More than simply watching a film, we interacted with an ambulatory film troupe, we became part of a performance, a happening; we had the experience of a film event for the everyman or the every child in us as we ran around the grounds during the interludes.
– D. Canales