1987-88 – The tallest and shortest players in NBA history played on the same team, the Bullets. Point guard Tyrone Curtis “Muggsy” Bogues (born in Baltimore), one of the fastest players on the court, stood at 5’3″. Center Manute Bol, 7’7″, was one of best shot-blockers in the history of the sport. With a 28 inch difference between them, Bogues and Bol appeared on three magazine covers together.

1979 – 1979 – In a preview of the NBA’s efforts to expand its commercial presence internationally, the Bullets went to China, the first time an NBA team appeared there. 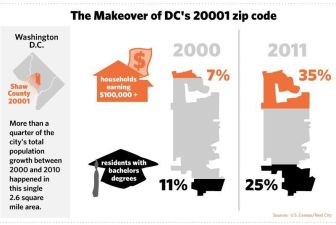 2014 – Museum Square Apartments, Chinatown: Property owner Bush Companies wanted its residents to fork up $250 million or lose their homes. Everyone who lives in the building receives a housing subsidy and most elderly, live on fixed incomes, and speak little English. (Anacostia Community Museum archives, Photograph by Susana Raab)

2008-09 – 2008 – The restaurant chain Benihana officially collaborates with Adidas on Gil II Zero “Hibachi” shoes for Wizards point guard Gilbert Arenas. Nicknamed Agent Zero, Arenas described his playing style with the term for a Japanese charcoal stove: “You just got burned. The arm is a hibachi. So when it gets hot, you can’t stop it. You’re getting cooked. You’re getting hibachi’d.” Only 1,000 pairs were made and sold exclusively in D.C., but Arenas never had the chance to wear the shoe on court. Ten years later, Arenas’ friend and Golden State Warrior Nick “Swaggy P” Young debuted the shoes in Game 3 of the 2018 Western Conference Finals. 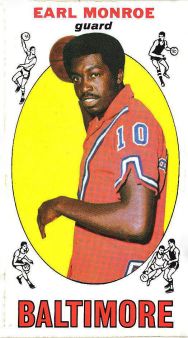 1969 – Earl Monroe basketball card. “I can remember going to games in downtown Baltimore and hearing the sound effects of a rifle being fired when Earl (the Pearl) Monroe performed the dipsey-doo.” (Dan Steinberg) 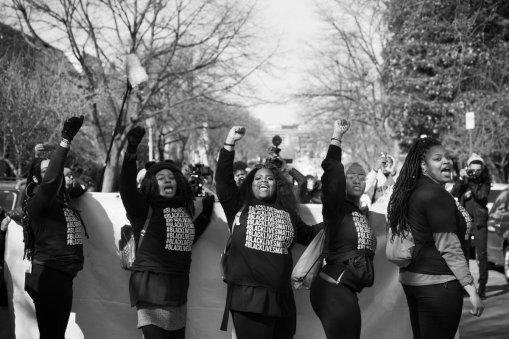 The NBA franchise currently based in the nation’s capital has played in three major cities under six different names. This project is a subjective, contextual history of the team and how it intertwines with civic issues, particularly: gun laws and violence, business and labor, real estate and gentrification, race, and class. Many of the stories don’t fit easily in one category, and issues often intersect.

Excerpt:
“The sports world and the art world have long been divided in American society, though that gap has been bridged increasingly in recent years. Hall of Fame pitcher Randy Johnson discovered a second career in photography; The Olympics brought four former competitors back this winter as artists-in-residence; NBA players are increasingly involved in designing their own sneakers.

A new exhibit at VisArts in Rockville called Power Forward is embracing that crossover, telling stories of sports in society […]

While the exhibition is already open, there is still an open call for submissions for the last installment, a deep dive on how the history of the Washington Bullets/Wizards have been intertwined with civic issues over the years.

If you have any relevant memorabilia or photos — from the Gilbert Arenas Adidas “Hibachi” sneakers to the “Stop Gentrification in Congress Heights” sign — you can email subjective.history.of.wizards [at] gmail [dot] com to be a part of the show.”  – Noah Frank, “Sports, history, politics and art collide at new Rockville exhibition,” WTOP, May 31, 2018.

May 23 – July 1, 2018
@ VisArts, Rockville, Maryland. Exhibited as part of the POWER FORWARD exhibition.