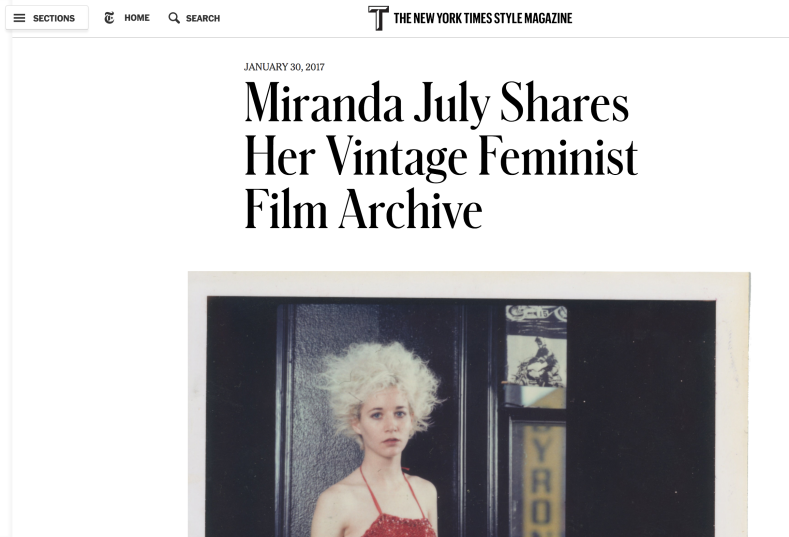 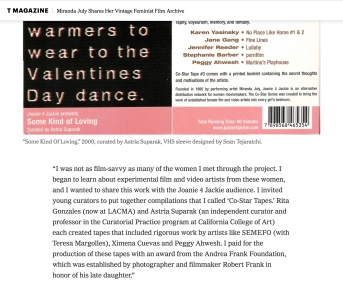 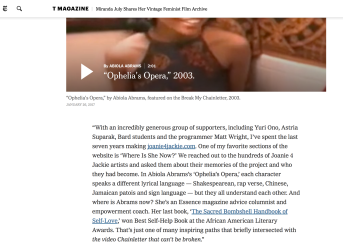 A devotion to women and their complexities is at the heart of all of the creative endeavors undertaken by Miranda July, the artist, writer, filmmaker — and radically motivated movie mogul. The latter gig, begun in 1995, was inspired by the Riot Grrrl scene then raging in Portland, Ore. Frustrated by the casual misogyny of mainstream and indie films, July, who had routinely built communities around herself, launched the feminist video series Big Miss Moviola (later changed to Joanie 4 Jackie); the hope was to offer an antidote to Hollywood’s disinterest in the lives of women, and to open up a dialogue among girls, as music and fanzines were doing in the mid-’90s. Joanie 4 Jackie quietly thrived until the early 2000s, providing an intimate, easy and invaluable way for female artists to reveal and share their lives.

Twenty-two years after the project began, the Getty Research Institute in Los Angeles has acquired the Joanie 4 Jackie collection (some 300 videos, documentation and press materials) from July, contextualizing the project within feminist and queer history, alongside the archives of, among others, the Guerrilla Girls and Robert Mapplethorpe.

Here, July takes us through the evolution of Joanie 4 Jackie through artifacts from the archive, highlighting its videos, early inspirations and influence. To see more, visit joanie4jackie.com, a massive digital record of the project that launched today. — Mary Kaye Schilling

“I was not as film-savvy as many of the women I met through the project. I began to learn about experimental film and video artists from these women, and I wanted to share this work with the Joanie 4 Jackie audience. I invited young curators to put together compilations that I called ‘Co-Star Tapes.’ Rita Gonzales (now at LACMA) and Astria Suparak (an independent curator and professor in the Curatorial Practice program at California College of Art) each created tapes that included rigorous work by artists like SEMEFO (with Teresa Margolles), Ximena Cuevas and Peggy Ahwesh.” — Miranda July

“With an incredibly generous group of supporters, including Yuri Ono, Astria Suparak, Bard students and the programmer Matt Wright, I’ve spent the last seven years making joanie4jackie.com. One of my favorite sections of the website is ‘Where Is She Now?’ We reached out to the hundreds of Joanie 4 Jackie artists and asked them about their memories of the project and who they had become.” — Miranda July