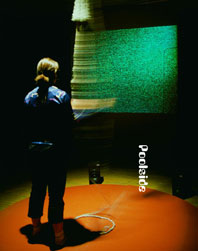 We Loved Getting Tested!

ASTRIA SUPARAK began by asking us all to put our right hands up. To answer in the negative to any of her provocative questions would require movement and effort, a lowering of those arms, an interruption in the sea of hands. Affirmation was established as the default position. Together we filled the negative space above our heads, participating in the performance staged by Suparak-as-researcher. We were queried about life, death and art – the really big questions. And our efforts were rewarded! In the guise of the pollster, Suparak thanked us by presenting a curated package of new videotapes that ask and answer, “Who are we now?”

Astria Suparak’s performance, in lieu of the standard curatorial introduction, brilliantly set up the themes of the program. Let’s Get Tested explores the schism between the methodology of science and foible-filled humanness. For the most part, the tapes affirm the value of the ineffable and the elusive: immeasurable phenomena such as playfulness and pleasure. As Suparak writes, “This set of eclectic work reckons that life should be savored, wonder is a calculated state of mind, and love will survive.”

However, neither does this collection lack irony grounded in social critique. For example, in Jim Munroe’s My Trip to Liberty City, a player subverts the intentions of the videogame Grand Theft Auto by going for a walk, practising his mime, and administering care to another character. Paper Rad’s Welcome to My Homey Page takes the form of a personal web page — a modern-day marvel invented with military intents and technology — and joyfully crams it with the visual detritus of our culture, ranging from purple Barbapapa to Pink Floyd’s prism. Jon Rubin’s Among the Living depicts a beautiful flower, shot to resemble educational botany films, rocking out to the sounds of Anthrax.

Most of these tapes are extremely short, delighting the audience with a quick-and-beautiful silliness that is nonetheless thoughtful, even profound. Alex Villar’s refusal to go around fences, climbing ever higher obstacles only to climb down them again, becomes an act of poetic rebellion in Temporary Occupations; Jeff Chapman’s Not Microwavable brattily points to the ubiquitousness of technology by microwaving the camera used to shoot this tape; Jon Sasaki presents the minutiae of rules and intricate strategy involved in a pointless adolescent pastime in Circle Game; and Gabriel Fowler edits cartoons of our youth into a loop, omitting everything but the explosions, creating eye-candy of never-ending destruction in Hit on the Head with 1000 Anvils. Similarly, the hypnotic beauty of Jennifer Schmidt’s Scan-Tron, which animates hundreds of computer punch cards representing the answers to who-knows-what questions, and Sandy Plotnikoff’s Hoodies, a study in surface identity which positions the artist in various jackets in various locations, are as formally compelling as they are playful and conceptually resonant.

However, the end of the program becomes darker. Digits, by JoEllen Martinson and William Scott Rees, skillfully and ironically recreates the persona of the “sexy terrorist” of the 1970s. This trope is so far removed from the images and reality of our time, it creates an alarming dissonance. Similarly, the distance between what we first see in Patrick Martinez’ Untitled (after the visible human project) and what is revealed over time is unsettling. Seductive abstract forms reveal themselves to be repeated cross-sections of two human bodies, our meaty flesh. This shift in Let’s Get Tested, from deliciousness to political and corporeal reality, is difficult. But the strength of Martinson, Rees and Martinez’ work sustains it.

Sadly, this is not true of the final two tapes in the package, Kon Petrochuk’s Anabolite See and Mike Olenick’s Son of Samsonite. The former is simply, tediously long. The audio component seems to posit faux scientific theories while beautiful film footage elucidates nothing. This tape proves, once again, how economical video art can be: suddenly 14 minutes feels like hours! Son of Samsonite, on the other hand, alienates with content. This beautifully crafted piece juxtaposes the common but nonetheless boring duo of sex and death. Fragments of lyrics from love songs and other pop culture sources are layered with references to the Lockerbie airline disaster and a stalker’s sexual obsession. A man in a bathtub embraces a life-size photograph of a woman buried in ice. The implied necrophilia is unmistakable, although the reason for its inclusion in this hopelessly muddled tape is not, leaving me to wonder whether the appropriate response to Son of Samsonite is ennui or outrage.

Also somewhat baffling is an audio piece by Miranda July, created for elevators as part of the 2002 Whitney Biennial. Removed from the context for which it was created, this fictitious scene (is it from a TV show? a movie? life?) inspires nothing more than mild curiosity. What would be unexpected or even compelling within the transitional space of the elevator becomes one-dimensional when subjected to the focused attention of a darkened screening room. July has an ardent following among Winnipeg performance and video artists. This piece, God’s Love, left us wanting more.

Thus the work represented in Let’s Get Tested ranged tremendously. Most pieces were short, strong and sweet; some long, oblique and torturous. However (and this is one of the many compelling oddities of Winnipeg), we were all excited to have the opportunity to see it, and grateful to Astria Suparak for embarking upon her mission to take video art wherever there is an audience: schools, sports bars, artist collectives, living rooms, skating rinks, churches, even artist-run centres!

Rarely can Winnipeggers see current, cutting-edge digital or electronic art from other regions without hopping on a plane ourselves.

The overwhelming success of Let’s Get Tested at Video Pool and the flurry of discussion and critique it has provoked are a testament to an appetite for more. Let’s hope that Suparak continues with her zealotry, criss-crossing the globe as a present-day video prophet, and brings us another package of tapes soon. Be they good, bad, or ugly, we will lift our hands into the air and say say, yes, we love the medium.

Read more about Let’s Get Tested.