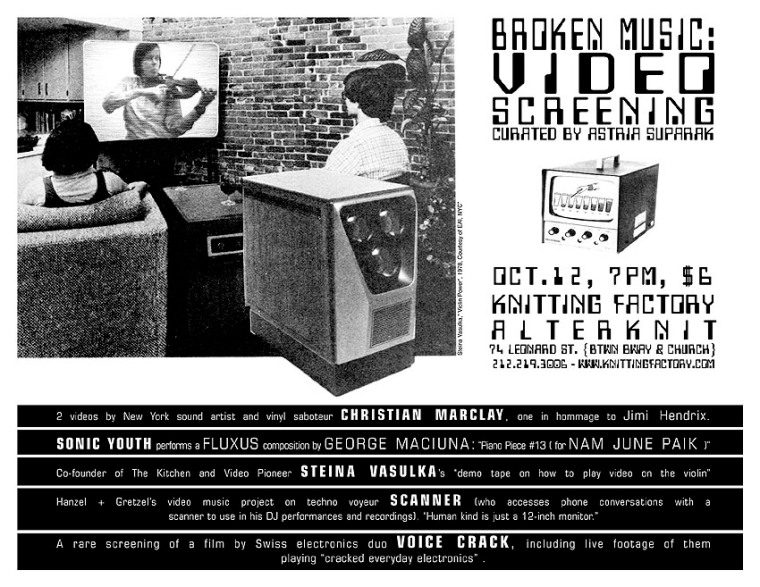 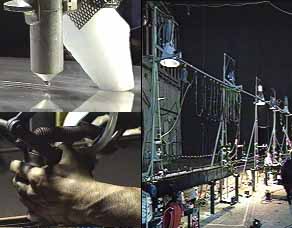 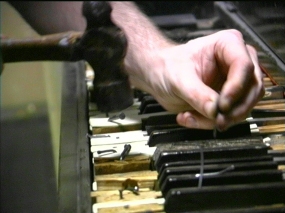 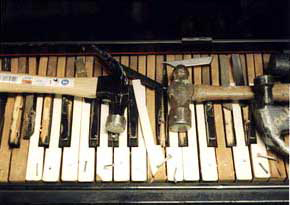 Curated by Astria Suparak
For The Knitting Factory, New York, NY
1999. Tour through 2003.

Breaking records, converting light into sound, making a guitar out of a turntable and a turntable with dry ice… Musical instruments are destroyed and technology is applied in peculiar ways. These are de-compositions made for video by both contemporary and historical figures, with a nod to Jimi Hendrix and the Fluxus movement.

.
[Editor’s Note: This program was named in consultation with Koen Holtkamp, in homage to Fluxus artist Milan Knížák’s performances and recordings of damaged records (beginning in 1965) and the book of the same name (ed. Ursula Block and Michael Glasmeier, DAAD, 1989).]

Violin Power (excerpt), Steina Vasulka (Santa Fe, NM), 1978, 7:10 min.
A “Demo tape on how to play video on the violin” by video pioneer and The Kitchen co-founder, Steina Vasulka.

Ghost (I don’t live today), Christian Marclay (New York, NY), 1985, 4:00 min.
From a performance at the Kitchen made for video in homage to Jimi Hendrix.

Kick That Habit, Voice Crack (Switzerland), 1990, film on video, 43 min.
Swiss electronics duo Voice Crack’s only film, with live footage playing their signature “Cracked Everyday Electronics”. “After years of collaboration, participating in the free music/ free jazz scene on winds, strings, and homemade instruments, the duo of Moslang and Guhl began to move into electronic and synthetic sounds, preferring “the usual and habitual, in everyday utensils from the household, the trades and industry” to commercially built instruments. By the time they recorded the LP Voice Crack, their only instruments were the bits of modern debris that they called “Cracked Everyday Electronics”: electric and electronic second-hand waste material in the form of microphones, record players, toys, tape recorders, radios, and the like.” – Gino Robair

.
Past versions of this program included:

This selection of experimental shorts lives up to its title right from the get-go with RECORD PLAYERS, which simply depicts a bunch of records being scratched, bent, wobbled, and smashed. Then SONIC YOUTH destroys a piano in PIANO PIECE #3. Other standouts in this program include the elegantly transmuted video work VIOLIN POWER, in which the vibrations of the violin’s strings twist across the screen like a humidity graph or a sine wave. Then there is I-BEAM, a fascinating documentary of a mad performance in some Euro warehouse, in which the musicians play dry ice, aluminum plates, steel beams, and liquid nitrogen…

On the whole, [the program] is strong of theme, and a must for visual music fanatics.
– Jamie Hook, Film Editor, “Broken Music“

New York film curator Astria Suparak assembled this wonderful program of videos on experimental music in which a variety of artists put familiar instruments and objects to unusual uses, showing that the seen world is alive with sonic possibilities.

In CHRISTIAN MARCLAY’s RECORD PLAYERS vinyl records are scratched, rubbed together, broken-everything but played on a turntable-and the forest of sounds beautifully matches the dense images of bodies and discs. The crazed intensity of MARCLAY’s live performances is also captured in GHOST (I Don’t Live for Today), for which he strums a phonograph as if it were a guitar. In KICK THAT HABIT, by the Swiss duo VOICE CRACK, musical images like a bow being applied to a very long string are paired with nonmusical ones like a train or a ski lift, encouraging us to hear everyday sounds as music too. SONIC YOUTH performs a composition by George Maciunas in PIANO PIECE #13 (For Nam June Paik), nailing down the keys of a piano and creating an unusual mix of sounds. In an excerpt from STEINA VASULKA’s VIOLIN POWER, simple violin tones seem to generate wavy alterations in the visuals, heightening our awareness of the vibrations. Some of the excerpts from BARRY SCHWARTZ’s videos and performances seem too brief, but there are still magical moments, such as dry ice causing a metal disk to resonate. It’s a pretty noisy program, but true to the ideas of John Cage, noise is redeemed as music. Chicago sound artist Kean Holtkamp will spin experimental music before the screening, and Suparak will attend.
– Fred Camper, “Critic’s Choice“

Visiting curator Astria Suparak presents a 75-minute program of experimental shorts in which various conventional objects are conscripted to make music in unconventional ways. Included: Christian Marclay’s Record Players (1984), in which vinyl records are flapped, slapped and scratched with fingernails; and Piano Piece #13 (1999) in which Sonic Youth make a piano shut up with finishing nails. The bulk of the program is the 43-minute Kick That Habit (1990), in which Swiss electronics duo Voice Crack deploy everyday materials and electronic implements to their own ends. The music is sparse and intriguing, while the camerawork and editing are supremely artful.
– Bill O’Driscoll